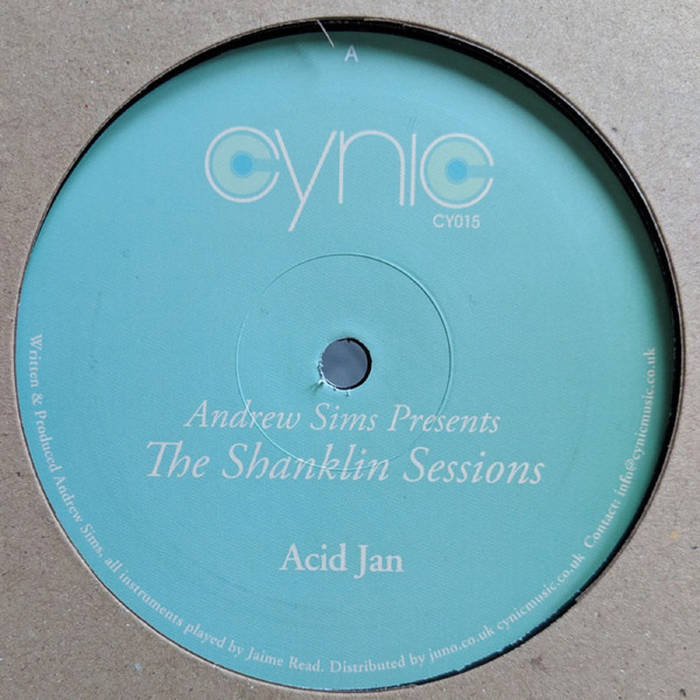 "The Shanklin Sessions came out of the Shanklin Road studio that Andy Sims shared with one of his partners from Soft Rocks, Bobby Coulman.

Acid Jan started it's life as a Jan Hammer edit that Andy was doing for one of Soft Rock's Disco Powerplay releases. There were a few parts that never made the final cut but were too good to leave, so Andy got friend Jaime Read in to jam with the leftover bits, and from that Acid Jan was born (none of the Jan's original parts made it to this finished re-incarnation).

Acid Jan found it's way onto Cynic label boss Felix's USB and subsequently was played at every festival/club that Felix played for about a year. When Andy heard Felix playing it at Alfresco Festival in 2016, they decided to release it on Cynic.
In search of a B side for the release, Andy dug out the other DAT's from the session Acid Jan was recorded at, and found Sitars over Shanklin, a suitably oddball track to grace the other side.

A little piece of Chicago via India recorded in Brighton."

Bandcamp Daily  your guide to the world of Bandcamp

MF DOOM is given his flowers, plus appearances from MC Jada Imani and Stanley Ipkuss